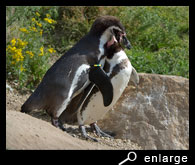 Mating isn't that simple for penguins. Their body looks like a bottle, and everyone who has tried to put one bottle on another, knows how difficult it is.

It all starts with the approach of the male(cock) to the female(hen). His bill points to his feet and he looks timid "from under his eyebrows" When she agrees to mate, she approaches him in the same way. The male will go behind her and lays his chin on her head and touches her softly with both flippers. Now the female will lay down and allows him to go on her back. She has to hold complete still, otherwise he will fall down. 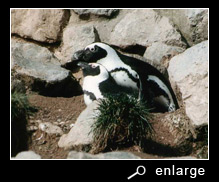 As soon as he is on the right place, she puts her tail aside and they copulate. Because they really have to balance, it only lasts a few seconds. They will copulate several times, till the female lay her eggs, a few days after the last copulation. Mostly they have two eggs, except for the emperor and king penguins, who have only one, and the little and African penguins who sometimes can have three eggs.
next chapter: Eggs
© Pinguins info  |   2000-2021