As soon as the chicks have their juvenile plumage, they can leave the nest. Now starts one of the most dangerous periods in the life of a penguin. They have to learn how to catch their own food and at the same time avoid predators. 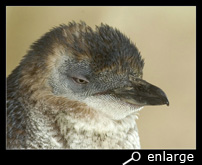 Among those species who return every day to the land (e.g. fairy penguins), the juveniles too will come ashore to stay overnight. Among the others, who only come ashore during breeding season, the juveniles will be driven away by the older ones.

After another year they will moult again and now they start looking more like the adult birds. For crested penguins it will last a few years till the crest has fully grown and the colours of the patches of emperor and king penguins will become more clear during time. They are sexually mature after 3 à 6 years, depending on the species. Most of the time, the first brood is no success.

All birds have to moult once in a year. While they need to protect a penguin against cold, water and sharp cliffs, their feathers wear a lot. Adult penguins (except the galapagos penguins) moult after the breeding period. Before that moulting they go to sea and stuff a lot of food, and than return ashore. During the moulting period (about three weeks), their feathers aren't waterproof so they would freeze and drown. (also look Body: feathers)
next chapter: Lifespan
© Pinguins info  |   2000-2021