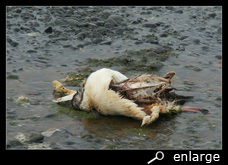 Like all animals, penguins too are part of the food chain, which means they have predators chasing and eating them. In these food chain, an animal only hunt and kill to satisfy its appetite and feed their young, not for fun. It is a natural selection, while only the weak and sick animals get caught.

Predators can be divided in 2 large groups, either when they chase breeding penguins on land or adult and juveniles, swimming in the water. And there are some parasites like lice, mite and fleas which cause illness and infections.

The enemies on land can be subdivided in two groups :


- All enemies who attack from above, like there are giant petrels, the Antarctic skuas or predatory gulls, sheathbills (Chionididae) and seagulls.

This includes all animals attacking penguins, their eggs and chicks, when they are ashore for breeding and moulting. Mostly these predators eliminate the weaker and sick birds, keeping the population healthy.

There is a long list of land-predators for penguins. Many of them are introduced by men, including rats, cats and dogs etc.

Four penguin species breed on the mainland : namely the African, humboldt, magellannic and the fairy little penguins. These are threatened by many land-predators. So a leopard can be very dangerous for African penguins. And when an island, with a colony, was connected with the mainland by a bridge, this colony was teased by foxes, wild cats and even snakes.
Fairy penguins are especially threatened by dingo's (wild dogs) and Tasmanian devils(marsupial animals)
And magellannic penguins often lose their eggs and chicks to armadillos.

Natural predators in the water

The best known predators are the leopard seals, but there are also fur seals, and whales and sharks.

To distract their predators and make the hunt more difficult, penguins usually enter in group in the water.

The leopard seal is relative to true seals and belongs to the family of the phocide (earless) seals. These, in opposite to eared seals, can only propel themselves on land by wriggling on their bellies or pulling themselves forward with their front limbs. They are well adjusted to a life in the water with their short limbs. Characteristic for these seals is the lack of external ears, although they can hear very well.

PHOTO OF LEOPARD SEAL
'Commonwealth of Australia copyright
reproduced by permission
To the family of the southern seals also belong, beside the leopard seals, the crab eaters, the Ross and the Weddell seals. They all live in and around Antarctica.

Leopard seals can reach a lenght of 4 m and weighs about 500 kg. They have a very large mouth, with the corners of their mouth reaching almost the back of their head. Their teeth consist of long, sharp incisors, large pointed eye-teeth and 3 pointed back teeth. In that way they are able to catch krill as well as fast swimming fishes and penguins.
The belly of a leopard seal is light coloured and the back is dark and spotted, so they are almost invisible in the water.
Eating a penguin by a leopard seal looks very cruel. The predator waits almost immobile where the penguins usually go ashore. As soon as a penguin comes too close, he grabs him with a fast move of his head and hold him very strongly between his jaws. Then he shakes his prey backwards and forwards with fast, abrupt movements till the skin of the penguin tears and he can bite parts of the flesh. 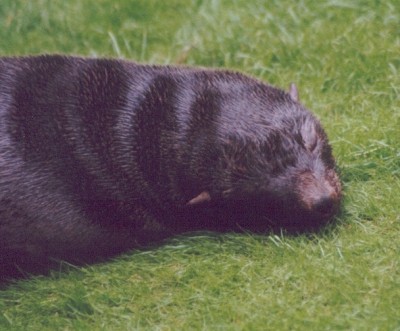 A relative South African sea bear.
In opposite to leopard seals, fur seals belong to the eared seals (otariidae seals). They are relative to sea lions and sea bears. Because they are able to turn their hind flippers forward, they can use all four limbs when moving on land. They are about 2 m long and weigh between 125 and 200 kg.
Because of their power of endurance, they can hunt a penguin for a long time and exhaust him so much that the bird needs to rest on the surface of the water, where he will be caught. Sometimes fur seals too, wait like a leopard seal at the place where penguins usually come ashore and catch them there. Luckily not all of the fur seals are predators of a penguin.

Killer whales (orcas) hunt for penguins, although these are only a small prey to an 8 m long orca. Killer whales are faster (40 km/hr) than penguins, but these are much more manoeuvrable. Therefore whales drive them inside of seaweed, where a penguin loses his advantage and gets trapped, where the heavy whale can catch him by breaking the weed with his body-mass.

Sharks too are a threat to those penguin-species, which live in the same waters as the sharks. This counts especially for Galapagos, Humboldt, African, Magellannic and fairy little penguins.

Although parasites are not a classical predator, they too can harm a penguin very much. They drink the blood of their prey and cause a lot of illness.
Some penguins die through worms in their digestive tract. Most of the time, it are the weaker animals who suffer by it.

Especially in Peru and Chile ticks, lice and fleas can be a real plague for seabirds, including the penguins. When these ticks are also carrier of a virus, it can lead to sickness with high fever and several side effects.