There are a lot of documentaries about penguins. I will certainly not mention them here, as often new ones are made.
But recently a few special films are released, which I will consider at length in the other subpages: The first one is "March of the penguins", by Luc Jacquet, and secondly "Happy Feet", a beautyful and funny animation by Warner Bros.

Furthermore on this page I will mention some films in which (real) penguins feature as stars or where a scene with penguins appears. The list isn't complete at all and tips for it are welcome.

March of the penguins

This film is also known under the title "The emperor's journey" or the original, French title "La Marche de l'Empereur". It is a story about emperor penguins, directed by Luc Jacquet, and released in 2005.
Studio: Warner Independent Pictures
Title: "March of the penguins"
Director: Luc Jacquet
Screenwriter: Luc Jacquet, Michel Fessler
Starring: Morgan Freeman (narrator)
Genre: Documentary for the whole family
Plot Summary: In the Antarctic, every March since the beginning of time, the quest begins to find the perfect mate and start a family. This courtship will begin with a long journey - a journey that will take them hundreds of miles across the continent by foot, in freezing cold temperatures, in brittle, icy winds and through deep, treacherous waters. They will risk starvation and attack by dangerous predators, under the harshest conditions on earth, all to find true love. 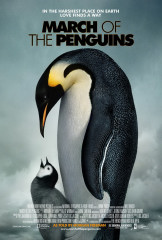 It is a marvellous love tribute to emperor penguins and Antarctica.
I really recommend it to all animal lovers, especially penguinlovers !

The Oscar winning, very funny film "Happy feet" with penguins came out on DVD on March 27th 2007.
Warner Bros calls this animated movie "a comedy adventure" set deep in Antarctica.
Is a must-see and must-have family film, filled not only with hilarious characters and exciting song and dance numbers, but important environmental lessons to which kids will respond. Happy Feet has something that every member of the family will enjoy.

Story:
Set deep in the heart of Antarctica, in a land ruled by singing emperor penguins, Happy Feet follows the adventures of tap dancing Mumble and his struggle to carry a tune. Cast out of the community for his strange dancing ways and alone for the first time in his life, Mumble sets out in search of his "heart song", which will ultimately lead him to his true love.
Along his journey, Mumble meets the Adelies who immediately embrace his cool moves. Together with his new friends, Mumble encounters some epic adventures and soon finds that being true to himself can make all the difference in the world.