Thanks to Mrs. Ilona Zühlke (p.r.) and Mr. Peter Vollbracht (attendant for the penguins) from the Zoo in Münster (Germany) I was able to take a look behind the scenes in the penguin home on Saturday January 20th, 2001. As this happened to be my birthday, you could imagine what a wonderful surprise it was.
I made a lot of pictures, but as I didn't want to scare them too much and used a 1600 ASA film without flash, there are qualitative not so good.

I was able to see a little chick (only 4 days old) in the nest. Because of the fact that a young African penguin has a very dark coat of downy feathers and of course by the fear of the birds too, the pictures are no great success, as you can see here.


Furthermore the adult penguin didn't like the interruption and tried to protect its chick by hiding it, and of course the chick searched for the warmth of the adult too. 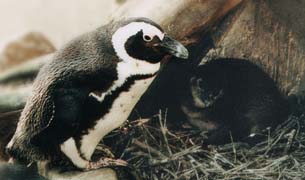 I could also see a chick of 36 days old. Here too, the adult penguins protected their young by hiding it and they tried to bite me, but I didn't want to scare them too much, so I was never close enough to let them do it.

The third little one was 75 days old. It was set apart, because it had to learn to eat dead fish. Until yet it was fed by its parents and now it needs to learn to catch a dead fish in the water. 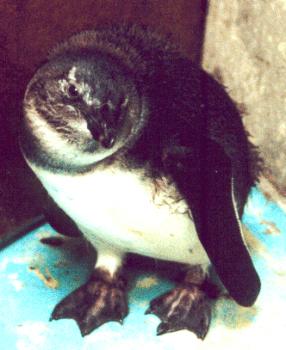 Normally penguins react on the moves from a fish and catch them then. But in a zoo this is not possible, so they have to learn how to catch their dead food. For an attendant, it takes a lot of care and patience to teach them so.

In the wild, adult birds take care for their chicks during about 100 days and then stop feeding them. At this time the chicks have enough fat and even outweight their parents.
In a zoo, chicks are fed by their parents for 60 days and then are taken away and placed apart in a separate "penguin school". While in the wild those youngsters group together and have to learn to catch fish alone, in a zoo they can do nothing with this "inherent ability". Here they don't get a stimulus of swimming fish and they have to learn to accept dead fish from the attendants. Of course this learning takes weeks and a lot of patient of the attendant.
First the chick is placed separate, where it will automatically defend itself and snap and bite at everything that moves around him and comes close. The attendant uses this natural reaction and holds a fish directly before its bill till the chick snaps it and is satisfied.
As soon as he has learned to accept the fish freely and not as a reaction, the chick will be brought in the water for the first time in his life. Now the fish is offered on the water surface. While in the meanwhile the hand looks familiar, the chicks will eat enough.
In the last phase they have to learn to recognize the fish as food without the hand and dive for it. This training takes weeks and much patient and time from the attendants.
When they are finally "graduated", they are brought to a separate water pool, not far from the "Wad-birds-aviary". When the breeding period is over for the adults, the chicks finally return to the colony. You can still recognize them as juveniles by their feathers, while they are grey and don't have the so remarkable black band yet. Around 2-3 years they are old enough to search a partner for life and raise their own chicks.

Mr. Peter Vollbracht also gave me the opportunity to have a penguin on my lap and caress her.
Sandy is used to people (see Relation to Sandy, so she stay seated there for quit some time.


Then I could sit between the penguins, but only Sandy and one young of three months old was brave and curious enough to come really close to me.


Afterwards, he gave me the most beautiful addition for my collection as someone can get. There were two eggs which weren't fertilized, so they were mend to be thrown away.
I want to accentuate that this were two unfertilized eggs, and only because they were useless, I did get them.


Don't ever take away eggs, chicks or even birds as a kind of souvenir when you're on vacation, but leave them where they are.
A few measures (it is somewhere in between an egg from a hen and one from a goose), to show there is a small difference between two eggs led in one nest :

At the end but very sincere I want to thank the two people who made this possible:


Mrs. I. Zühlke and Mr. P. Volbracht :
THANK YOU FOR THE MOST BEAUTIFUL BIRTHDAY
A PENGUINLOVER CAN GET !!!!